Remember when Mercy Aigbe said “I wear bum shorts so that all those toothpick leg girls will not snatch my husband  (Read here).  Well, it appears that the Bum Shorts didn’t do the magic after all.

Reports have it that her seven-year old marriage to her husband is over, as she had been enduring domestic violence which got worse lately. Several blogs allege that the crisis in her marriage, was caused by a lady whom the husband has been having an affair with. 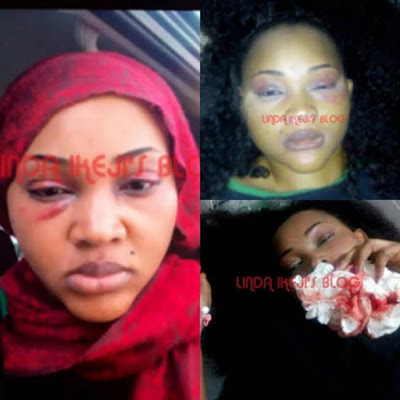 This is apparently, not the first report of domestic violence in her marriage. Back in April 2013, her husband, Lanre Gentry was accused of dragging her out of a hotel room into his car after battering her at an event. She later released a video with her husband denying that the incident took place.

How do you do that? Come on air (with the man) who battered you, a few days after your wounds begin to heal and cover up for him? Women like this, who cover up and stick to the abusive men in their lives are enablers of domestic violence. That is why he will do it repeatedly, because he knows that you will cover up for him, over and over again; So, he will continue with his abusive acts.

The biggest enabler of domestic violence is culture, the way men and women are raised. A husband is the crown of the woman. Many Nigerian women have remained and died in abusive relationships. They would rather wither away in an unhappy marriage than bask in the sunshine of being happily divorced because of the stigma attached to being a divorced woman. Our society always blames the woman. No matter what a woman achieves, she is nothing without a man.  That is probably why Mercy Aigbe married a man who cannot even speak or write a good sentence and probably with half the education she received. I mean, just look at his statement below:

Religion, also enables domestic Violence. GOD HATES DIVORCE, they say; one of the lies that is used to trap a lot of helpless Nigerian women in abusive marriages. She is advised to endure and pray for her husband to change. So she stays and prays hoping that one day he would change. What if that one day never comes? How long does she keep praying for? 5, 10 or or maybe 15 yrs. At what point does she realize that she has prayed enough and need to take control of the situation?

Honestly, it is high time that these so called “Men of God” start addressing these issues rationally during their sermons, nobody prays for a broken home but please, you all need to STOP using the bible to manipulate women into staying in toxic and abusive relationships.

Well, I hope Mercy has learnt her lesson now and would do the right thing by divorcing him. It is time we stop enabling these things. There is no need to stay in a marriage that is plagued by domestic violence all because you want to answer MRS Somebody.

Dear Mercy, run while you still have a chance, the next time you might not be so lucky and you may just be removed in a body bag.