So I bumped into this ad by So Klin Nigeria. And I also see a lot of Nigerian Ads on TV, whenever I am watching Nigerian Tv Channels and they are so annoyingly gender stereotyped showing only the woman doing the cooking, cleaning and cleaning. Men are rarely portrayed in domestic settings or doing household chores. Traditionally, Nigerian women are expected to be the main caregivers, looking after the home and children. 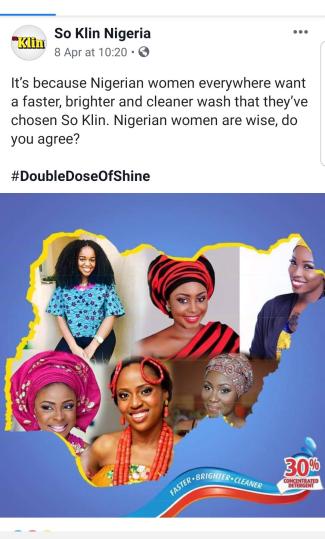 I don’t think it is only women that want a faster, brighter and cleaner wash. I want to believe that Men also want that too.  The same way that cooking should be seen as a life skill and not something that only women should be expected to do.

The times have changed now and these ads should reflect the changing times. I mean, we are in 2019 now.

Even when I watch Nigerian movies, I see sexist gender stereotype starring at me in the face. The other day I was watching a Naija movie #Guilty and a dad facing jail term for allegedly killing his wife says this to his lawyer;

“I want to walk Anna down the aisle”.

“I want to see Jacob graduate from university and I can’t do that from prison”.

The kids in this movie are about 6yrs (girl) and 4yrs( boy).

In my head I’m like who are the people who write such sexist scripts?  Why couldn’t he just say “I want to see my kids graduate from the university and get married?” No, they had to reinforce the stereotype that see women as just wives and men as breadwinners. To actually think that nobody on that set paused, to think for a second and critic that line is really sad.

Nollywood remains persistent in making a woman pay, for daring to have a career and be a successful woman. I have seen one to many Naija movies with such story lines. With such depictions of women, these beliefs are reinforced.

Sexist gender stereotypes in the society need to be challenged not reinforced, because gender stereotypes hold us all back. The Media has a role to play in helping to address these stereotypes and challenge attitudes because the way the Nigerian woman is depicted in Ads and movies, affects how the public views them, as the media does not only inform, it also shapes perception.

Dear So Klin, Maggi and Nollywood, you can do better. Please stop gender stereotyping with your ads and movies. Use your medium to challenge these attitudes as this will  have an impact on how women are generally perceived and treated in the society.